Here is a short story on the project, published in The Ka Leo student newspaper: 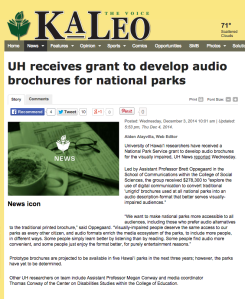 Led by Assistant Professor Brett Oppegaard in the School of Communications within the College of Social Sciences, the group received $278,300 to “explore the use of digital communication to convert traditional ‘unigrid’ brochures used at all national parks into an audio description-format that better serves visually-impaired audiences.”

“We want to make national parks more accessible to all audiences, including those who prefer audio alternatives to the traditional printed brochure,” said Oppegaard. “Visually-impaired people deserve the same access to our parks as every other citizen, and audio formats enrich the media ecosystem of the parks, to include more people, in different ways. Some people simply learn better by listening than by reading. Some people find audio more convenient, and some people just enjoy the format better, for purely entertainment reasons.”

Targeted for completion within three years, the project will involve the creation of various prototypes based at five parks throughout the nation, including one, yet to be determined, in Hawai‘i.

Other UH researchers on team include Assistant Professor Megan Conway and media coordinator Thomas Conway of the Center on Disabilities Studies within the College of Education.